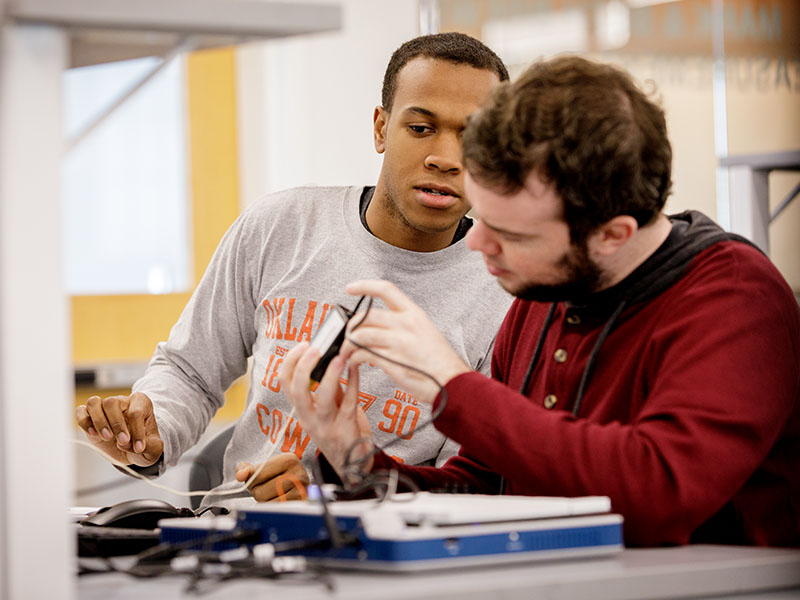 The research carried out by the Communications Group at ECE focuses on the key enabling technologies needed for designing and implementing future communication systems. Aspects of information theory, communication theory and signal processing are used to improve the throughput, robustness and reliability of communications.

received the B.E. degree (highest honors) from Shanghai Jiao Tong University, Shanghai, China, in July 1999 and the M.S. and Ph.D. degrees from Syracuse University, Syracuse, NY, USA, in 2003 and 2006, respectively, all in electrical engineering. From 1999 to 2000, she worked as a System Engineer with Guoxin Lucent Technologies Network Technologies Company, Ltd., Shanghai, China. Since August 2006, she has been with Oklahoma State University, Stillwater, OK, USA, where she is currently an Associate Professor with the School of Electrical and Computer Engineering, College of Engineering, Architecture and Technology. Her research interests include statistical signal processing and data fusion for communications and wireless sensor networks.

joined the School of Electrical and Computer Engineering, Oklahoma State University, Stillwater, OK, as an Assistant Professor in Fall 2016. He received his Ph.D. degree in Electrical and Computer Engineering, Texas A&M University, College Station, TX, 2012, the M.Sc. degree in Electrical Engineering, New Mexico Tech, NM, 2008, and the B.Sc. degree in Electrical and Electronics Engineering, Eskisehir Osmangazi University, Turkey, 2006.He worked as a visiting research assistant in Electrical and Computer Engineering Program at Texas A&M University at Qatar (2008–2009). During the summer of 2012, he worked with the Femto-cell interference management team in the Corporate R&D at New Jersey Research Center, Qualcomm Inc. After his Ph.D. study, he joined Qualcomm Technologies Inc., San Diego, CA, where he worked as a Senior Modem Systems Engineer at the Department of Qualcomm Mobile Computing. He has received numerous Qualstar awards for his achievements/contributions in Qualcomm. His research interests are in the areas of design and performance analysis of communications systems in in both theoretical and practical point of views, particularly interference management and statistical modeling of interference in next-generation wireless and cognitive radio networks.

is a Regents Professor in the School of Electrical and Computer Engineering at Oklahoma State University in Stillwater. His technical research is in the fields of data security and cryptography, information theory, neural networks, and quantum information, and he has also written on archaeoastronomy and art. His contributions include study of random sequences, theory of instantaneously trained neural networks, and a new protocol for cryptography.

received a B.S. in General Engineering from the United States Military Academy at West Point. He served five years in the U.S. Army as a Signal Corps officer before receiving a M.S. and Ph.D. in Electrical Engineering from Kansas State University. His research interests include telecommunications network analysis and design, teaching in a virtual environment and secure communications protocols. He has performed contract research for organizations such as Williams Telecommunications, the U.S. Air Force, Motorola Government Electronics Group, the U.S. Department of Education and the U.S. Department of Defense. He was a key player in the development of OSU's Master of Science in Telecommunications Management degree and continues to be heavily involved with this program. He has extensive experience in distance education, is a ten time winner of National Technological University's Outstanding Instructor award and holds the department record for getting bonked on the head with a softball in one season (3 times) set in 2005.